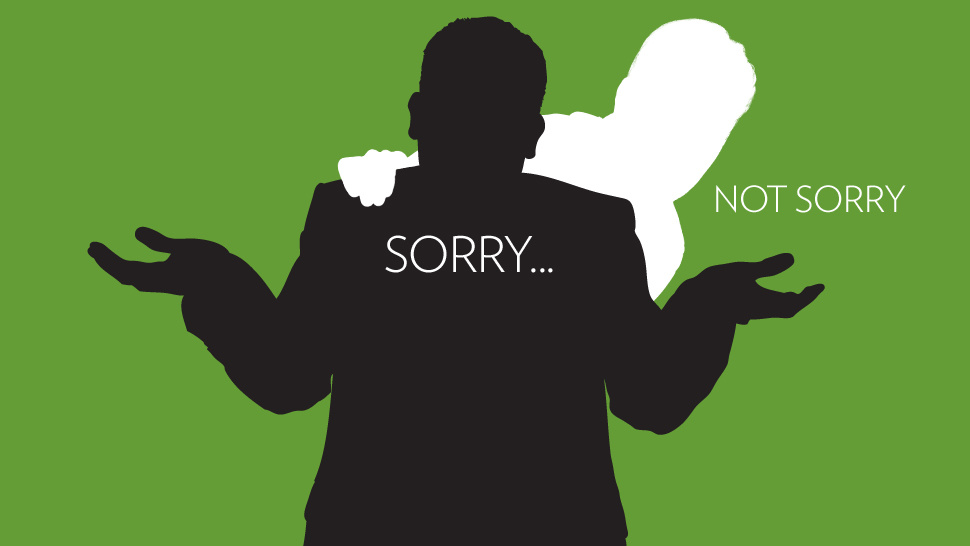 Why the Act of Relentless Apologizing Has Rendered the World Senseless!

Elton John once sang, “Sorry Seems To Be The Hardest Word.”

Lately, it seems to me that every man and his dog are apologizing for something, and to be honest, it’s really beginning to get on my tits.

Don’t believe me? Find the most opinionated and annoying friend you have – everyone has one, or maybe several if you are particularly unlucky – log on to social media and look at a page they have commented on.  It helps if they have started the internet equivalent of World War III, though this isn’t mandatory.  I guarantee you that they, or those they are interacting with, will have hurled innumerable insults, scathing putdowns and foisted many an idiotic opinion on individuals, many of which will have been preceded by the phrase “I’m sorry, but…”

In fact, really angry and particularly incensed and indignant individuals may well have prefaced their bile-filled rants with an even stronger apology in the form of “WELL, I’m sorry, but…”

It absolutely boils my piss to the point where if I’m speaking to someone and they use either of those phrases inappropriately, I instantly write them off as a person and start idly wondering if I can feasibly get away with their swift removal from the earth. In this scenario I would preferably be wielding an axe or some such weapon of doom whilst calmly exclaiming “Well, I’m sorry but that fucking head is coming off,” before proceeding to start wildly chopping at their limbs in an effort to give them something to be really sorry about.

Seriously, they could have invented a cure for every STD known to man, solved the problem of world hunger and actually have unselfconsciously avowed in public that William Shatner was a really talented actor, but I would still want them dead.

Apologizing before proffering an opinion is done for either one or a combination of these three reasons:

2 – You know full well you are going to hurt/offend someone by imparting said opinion but you don’t care enough about maintaining harmony or hurting someone else’s feelings because it is your God given right to have an opinion and to spout it to anyone who is capable of listening. Or…

3 – Your opinion may well be valid, coherent, eloquently put and be within the context of the conversation, but you lack the courage of your convictions and offer a token apology beforehand in an attempt to cover your embarrassment.

1 2 3
Articles 43 don't apologize 1 smash 3 sorry not sorry 1
Newer Post
The Tasteless Gentlemen Show – Episode 62 – What Would You Tell Your Younger Self?
Older Post
Super Savage 2017 no10